ECEC is excited to introduce a new guidelines template, which intends to aid in the development or updating of EC guidelines in European countries according to the best available evidence. Download Emergency Contraception: A guideline for service provision in Europe here.

Developed with the support of the European Society of Contraception, this tool addresses the key issues that should be included in all clinical EC guidelines.

WHO has released new guidelines on priority actions needed to ensure that different human rights dimensions are systematically and clearly integrated into the provision of contraceptive information and services. Regarding EC, the guidelines recommend that EC be included within the essential medicine supply chain; that special efforts be made to provide comprehensive EC information and services to displaced populations, those in crisis settings, and survivors of sexual violence; and that every individual has the opportunity to make an informed decision about using modern contraception, including EC, without discrimination. These guidelines complement existing WHO recommendations for sexual and reproductive health programs, including guidance on family planning. Read the full report here.

A Behavior and Attitudes survey carried out on behalf of Bayer Healthcare found that in the last two years, approximately 17% of women had accessed EC, with 5% accessing it more than once. Read more about the survey here.

On March 5, the European Union Agency for Fundamental Rights (FRA) is hosting a conference to launch the results of the largest violence against women survey ever undertaken in the EU.  Findings are based on interviews with 42,000 women across the 28 EU Member States and focus on women’s experiences of physical, sexual, and psychological violence and the consequences of such violence.  The conference, officially titled “Violence against women across the EU: Abuse at home, work, in public and online” serves as a forum for about 250 decision makers and practitioners to discuss the survey findings and their importance to EU and national policy-making. For further information about the conference and report, visit here. Please also view ICEC’s Emergency Contraception for Rape Survivors: A Human Rights and Public Health Imperative factsheet for information on why provision of EC is a critical component of post-rape care for women.

Beginning in January 2014, the European Medicines Agency (EMA) started reviewing emergency contraceptives to assess whether increased body weight and body mass index (BMI) reduce the efficacy of these medications. Based on the results of this review, EMA will assess whether any changes should be made to the product information for emergency contraceptives containing levonorgestrel or ulipristal acetate. For further information, read the EMA press release.

A study published in the European Journal of Contraception and Reproductive Health Care in 2013 sought to identify knowledge of and attitudes towards EC among women from five European countries. Sexually-active women from France, Germany, Italy, Spain, and the United Kingdom were asked about their use of and opinions on EC in an internet-based survey. Of the 7,170 women who completed the survey, 30% reported having had unprotected sexual intercourse during the past 12 months, and of these women, 24% reported having used EC. The most common reasons given for not using EC were not perceiving themselves to be at risk for pregnancy and not thinking of EC as an option. One-third of respondents indicated that they do not know how EC works, and several respondents expressed misconceptions about EC, such as that it can lead to infertility. 79% of women agreed that EC is a responsible choice to prevent unwanted pregnancy, but nearly one-third of women who used EC felt uncomfortable or judged when obtaining it. The authors conclude that EC is underutilized by three-quarters of the women surveyed, and women do not recognize that they may be at risk of pregnancy when contraception fails. Since there were still several misbeliefs about EC expressed among the women surveyed, the authors call for better education of the public on EC.

As evidenced by these pictures from Bulgaria, some European countries allow advertising of over-the-counter medical products. This particular ad is for EC and has been placed on the side of a shopping cart. 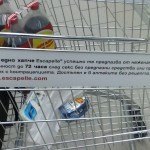 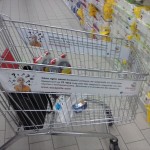 Following a long debate in Germany over whether LNG EC should have an over the counter status, the German Federal Institute for Drugs and Medical Devices recommended recently that emergency contraception pills should be available without a prescription. It is now up to the Minister of Health to decide whether he will adopt the recommendation or not.

Read the full article in German or Google-translated English. To learn more about the current status of EC in Germany, please visit our website.

It was recently reported that the Spanish National Health Service (NHS) does not fund EC nor does it reimburse patients who purchase EC. Furthermore, EC availability is dependent on the regions within Spain, and it is not universally available throughout the country. This issue was raised by Grupo Parlamentario de Unión Progreso y Democracia (UPyD), which is questioning the Spanish government’s commitment to sexual and reproductive health, especially considering that the Ministry of Health recently retired eight brands of oral contraceptives in the core portfolio of the NHS. UPyD also contends that Spain has suspended its sexual and reproductive health education programs. The Spanish Ministry of Health has responded that in regards to sexual and reproductive health, it has ratified all international agreements approved by the UN and its new Plan for Children and Adolescents promotes education around these issues.

Read the original article in Spanish here, and the Google-translated version in English here.

ECEC has published an article in WHO’s Entre Nous European Magazine for Sexual and Reproductive Health. In it, ECEC outlines the unequal EC access situation in Europe and advocates for the standardization of EC guidelines across the continent to help reduce these inequalities. Ultimately, ECEC recommends that every woman seeking EC be informed of the methods available to her so she can truly exercise choice concerning her reproductive health. ECEC would like to extend a special thank you to all of the informants who helped us collect and validate this valuable data!

War in Ukraine: European Parliament calls to ensure access to emergency contraception for women throughout conflict and displacement.

May 2022. On May 5th, the European Parliament adopted a resolution that strongly condemns the use of sexual and gender-based…
Read More

If cookies use is rejected,  the EAST EUROPEAN INSTITUTE FOR REPRODUCTIVE HEALTH can not guarantee the full functionality of the ECEC website. You can obtain further information in our COOKIES POLICY and the end of this page.

This website uses cookies so that we can provide you with the best user experience possible. Cookie information is stored in your browser and performs functions such as recognising you when you return to our website and helping our team to understand which sections of the website you find most interesting and useful.

Strictly Necessary Cookie should be enabled at all times so that we can save your preferences for cookie settings.

If you disable this cookie, we will not be able to save your preferences. This means that every time you visit this website you will need to enable or disable cookies again.

This website uses Google Analytics to collect anonymous information such as the number of visitors to the site, and the most popular pages.

Please enable Strictly Necessary Cookies first so that we can save your preferences!